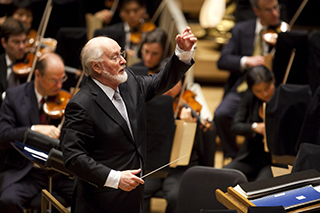 John WilliamsIn a career spanning five decades, John Williams has become one of America’s most accomplished and successful composers for film and for the concert stage, and he remains one of our nation’s most distinguished and contributive musical voices. He has composed the music and served as music director for more than 100 films, including all six Star Wars films, the first three Harry Potter films, Superman, JFK, Born on the Fourth of July, Memoirs of a Geisha, Far and Away, The Accidental Tourist, Home Alone and The Book Thief. His 40-year artistic partnership with director Steven Spielberg has resulted in many of Hollywood’s most acclaimed and successful films, including Schindler’s List, E.T. The Extra-Terrestrial, Jaws, Jurassic Park, Close Encounters of the Third Kind, the Indiana Jones films, Munich,Saving Private Ryan, The Adventures of Tintin, War Horse and Lincoln. His contributions to television music include scores for more than 200 television films for the groundbreaking, early anthology series Alcoa Theatre, Kraft Television Theatre, Chrysler Theatre and Playhouse 90, as well as themes for NBC Nightly News (The Mission), NBC’s Meet the Press and the PBS arts showcase Great Performances. Williams also composed themes for the 1984, 1988 and 1996 Summer Olympic Games, and the 2002 Winter Olympic Games. He has received five Academy Awards and 49 Oscar nominations, making him the Academy’s most-nominated living person and the second-most nominated person in the history of the Oscars. He has received seven British Academy Awards, 21 Grammys, four Golden Globes, five Emmys and numerous gold and platinum records. In 2003, he received the Olympic Order (the IOC’s highest honor) for his contributions to the Olympic movement. He received the prestigious Kennedy Center Honor in December of 2004. In 2009 Williams was inducted into the American Academy of Arts & Sciences, and he received the National Medal of Arts, the highest award given to artists by the U.S. government.

In January 1980, Williams was named 19th music director of the Boston Pops Orchestra, succeeding the legendary Arthur Fiedler. He currently holds the title of Boston Pops laureate conductor, which he assumed following his retirement in December 1993, after 14 highly successful seasons. He also holds the title of artist-in-residence at Tanglewood. Williams has composed numerous works for the concert stage, among them two symphonies, and concertos commissioned by several of the world’s leading orchestras, including a cello concerto for the Boston Symphony Orchestra, a bassoon concerto for the New York Philharmonic, a trumpet concerto for the Cleveland Orchestra, and a horn concerto for the Chicago Symphony Orchestra. In 2009 he composed and arranged Air and Simple Gifts especially for the first inaugural ceremony of President Barack Obama, and in September 2009 the Boston Symphony premiered a new concerto for harp and orchestra entitled On Willows and Birches.