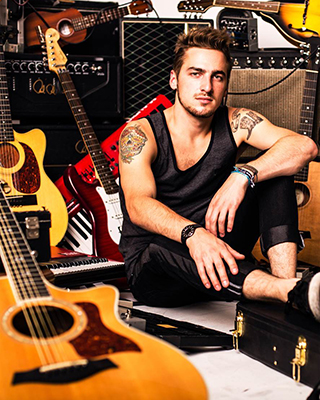 What began in 2008 as a passion project in a bedroom studio in Burbank, California has now become a whirlwind endeavor, with energetic and dedicated fans across the globe. Kendall Schmidt, 23, is the founder of the adored electro-pop band Heffron Drive.

Schmidt’s passion for music began when he was just a child. As a youngster, he would often recite whole songs after hearing them just once on the radio. Ever the singer, he soon wanted to broaden his musical horizons. Initially he tried playing the violin and drums, but neither instrument seemed to fit. One day, however, Schmidt borrowed his brother’s guitar, and, from that point forward, he was hooked. He taught himself how to play guitar and eventually released a number of covers on YouTube, which garnered his first fans.

The initial encounter between Schmidt and Dustin Belt, a future Heffron Drive member, occurred at a screening for Schmidt’s brother’s movie in Los Angeles, California. The two became instant friends; learning that each was a musician, had been born in the same hospital in Wichita, Kansas, and currently lived on the same street in Burbank, California. The street, no surprise, was Heffron Drive. With money he earned from an acting gig, Schmidt purchased some recording gear, and the two friends embarked on a musical journey, knowing only to trust their ears and passion for music. When the question of what to name the newly formed band arose, Heffron Drivewas the perfect fit.The band started uploading songs to the then popular Myspace, and, soon thereafter, received an overwhelming amount of interest. The internet was buzzing about the new band’s unique music, and it wasn’t uncommon to find the play counter hovering around 20,000 plays on any given day.

Around mid-2009, soon after the release of Heffron Drive’s music, Schmidt was asked to become the lead singer of the band Big Time Rush. He accepted, and BTR rapidly became a global phenomenon, with tens of millions of fans across the globe, millions of records and tickets sold and performances across three continents. Not wanting Heffron Drive to fall apart during his BTR success, Schmidt helped secure Belt as a tour guitarist for the group. Although extremely busy, the two still found time to create music for Heffron Drive.