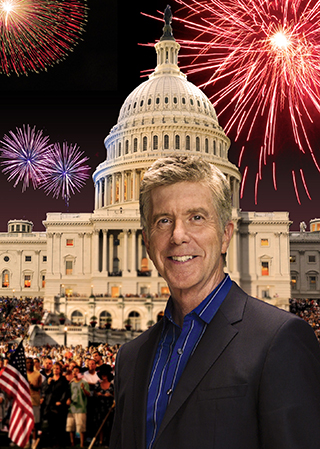 Tom Bergeron Two-time Emmy Award-winning host Tom Bergeron always guarantees his audience a fun and memorable evening with his wit and humor. Vying for honors as the busiest man in TV, Bergeron released his first book I’m Hosting as Fast as I Can! Zen and the Art of Staying Sane in Hollywood to rave reviews.

Bergeron began his broadcasting career in 1972 in his hometown of Haverhill, Massachusetts. He spent over a decade with WBZ-TV in Boston, hosting a number of popular shows. In 1994, he became host of Breakfast Time on FX, which morphed into Fox After Breakfast when it moved to the FOX network. He became a fill-in anchor on Good Morning America in 1997 before he segued to Hollywood Squares in 1998. While hosting Hollywood Squares, Bergeron kept busy as a fill-in anchor on CBS' The Early Show and host of Supper Club for Planet Green. He can now be seen hosting America's Funniest Home Videos and ABC's hit Dancing With The Stars, and continues to be a guest correspondent for Good Morning America. He has been chosen as one of the first class of inductees to the Massachusetts Broadcasters Hall of Fame at Massosoit College. In between projects, Bergeron has hosted everything from the 60th Annual Primetime Emmy Awards and Miss America Pageant, to the 33rd Annual Daytime Emmy Awards, and the Academy Of Television Arts & Sciences Foundation’s 28th College Television Awards Gala.

Bergeron spends a lot of his free time volunteering his services for several charity events. He was the national celebrity spokesperson for March of Dimes’ March for Babies and was awarded their March of Dimes Special President’s Award for Volunteer Excellence. He has also been involved in the Muscular Dystrophy Association and acted as the host of the Jerry Lewis MDA Telethon. Bergeron is a confessed gym rat, working out four to five days a week with a trainer. He also enjoys running and riding his bike on the beach. He splits his time between Connecticut and California, with his wife and two daughters.