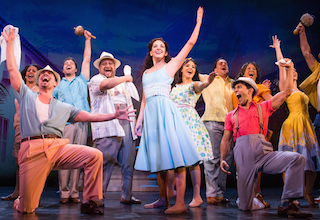 ON YOUR FEET! Gloria Estefan has sold over 100 million records and sold out stadiums around the world – together, Emilio & Gloria Estefan have won 26 Grammy Awards – but their music is only half the story. From the heart of Havana to the streets of Miami came a cultural phenomenon unlike anything the pop music industry had ever seen. ON YOUR FEET! is a new Broadway musical that follows the Estefans' journey to superstardom, set to their chart-topping smash hits, including “Rhythm Is Gonna Get You,” “Conga,” “1-2-3,” “Get On Your Feet,” “Mi Tierra,” “Don’t Want To Lose You Now,” “Reach,” and more. Leading a cast of 30, Cuban-American singer and actress Ana Villafañe, named one of The Hollywood Reporter’s top Broadway Breakout Stars of 2015, makes her “star-is-born, supernova debut” (Deadline) as Gloria Estefan opposite Josh Segarra, who brings a “forceful magnetism” (New York Times) to the role Emilio Estefan. Directed by two-time Tony Award-winner Jerry Mitchell (Kinky Boots, Hairspray) and choreographed by Olivier Award winner and Tony Award nominee Sergio Trujillo (Jersey Boys, Memphis) with an original book by Academy Award-winner Alexander Dinelaris (Birdman, The Bodyguard Musical), ON YOUR FEET! opened at the Marquis Theatre in New York City on Thursday, November 5, 2015.

“The very air in the room seems to vibrate in this fresh, flashy and undeniably crowd-pleasing new musical. Resist if you dare!” – The New York Times

Watch a preview of ON YOUR FEET!