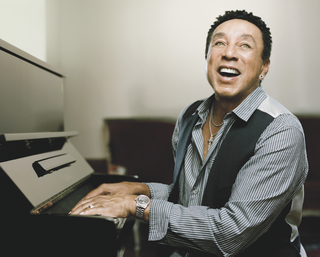 Smokey Robinson William "Smokey" Robinson, Jr. is an American singer-songwriter, producer and co-founder of Motown Records. Robinson was the lead singer of the R&B group the Miracles.

Robinson was dubbed "Smokey Joe" as a child and later simply became known as Smokey. Robinson’s interest in music was born of the diversity of music in his home growing up. He began performing and songwriting in elementary school. As a teen, Robinson started the music group Five Chimes with friends Ronald White and Pete Moore. Five Chimes became The Matadors with Bobby Rogers and his cousin Claudette Rogers. The group played Detroit venues and eventually morphed into the Miracles.

When Robinson and the Miracles met songwriter Berry Gordy after a failed audition for Jackie Wilson’s managers, everything changed. Robinson brought a notebook with 100 songs he had written. Gordy was impressed with Robinson’s ambitious songwriting as well as his vocals. Gordy helped the Miracles release their first single, "Got a Job", an answer song to “Get A Job,” which was a hit at the time. It was the beginning of a lifelong collaboration and the beginning of Motown.

The Miracles went on to record the hit single, "Shop Around", which would become Motown's first million-selling record. Between 1960 and 1970, Robinson produced 26 Top 40 hits with the Miracles. To name a few: “I Second That Emotion,” "Baby Baby Don't Cry," "Ooo Baby Baby,” and the group's only number-one hit with Robinson, "The Tears of a Clown."  Robinson was also a songwriter/producer for Motown’s top acts including Mary Wells, The Temptations, Brenda Holloway, The Marvelettes and Marvin Gaye.

After much success, Robinson wanted to retire from touring to focus on raising his two children and on his duties as Motown's vice president. However, the success of the group's "Tears of a Clown" made Robinson stay with the group.

After a year of retirement, Robinson announced his comeback with the release of the eponymous Smokey album, which included the hit ballad "Baby Come Close.” Robinson’s hit follow up album, A Quiet Storm, launched three singles – the number one R&B hit "Baby That's Backatcha," "The Agony & The Ecstasy," and "Quiet Storm".

Later, Robinson wrote his first Top 10 pop single, "Cruisin',” which peaked at number four on Billboard’s Hot 100 and was his first solo number one in New Zealand. Robinson topped charts again with the sensual ballad, "Being with You," which peaked at number two on the Billboard Hot 100 and was number one in the UK, his most successful single to date. Later, he teamed up with Motown label mate Rick James for the ballad "Ebony Eyes."

Next, Robinson offered up, One Heartbeat, which featured singles, "Just to See Her" and "One Heartbeat.” Aided by popular music videos, the former won Robinson his first Grammy and went platinum. Within the same year he was inducted into the Rock & Roll Hall of Fame. Throughout his career, Robinson has garnered multiple awards and honors, including: honorary degrees from Howard University and Berkley School of Music where he has been named “Doctor of Music,” a National Medal of Arts, and Lifetime Achievement awards from BET and Society of Singers to name a few. He has stars on the Hollywood Walk of Fame individually and with the Miracles.

Smokey & Friends, his most recent work, was an album of duets and included Elton John, Mary J. Blige, John Legend and James Taylor and was number 12 on the Billboard album chart.