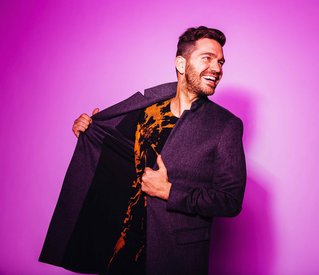 In ways both large and small, Andy Grammer is thinking a lot about how to speak his own truth. The concept of honesty—what it means and how to attain it—offers both inspiration and challenge to one of the most successful pop artists to emerge in recent years.

“I’m continually trying to broaden the spectrum of which colors I can paint with,” says Grammer. “And I think being as honest as possible lets you use contrast—pushing boundaries and being self-deprecating allows you to also go for the sweeter things.”

“As someone who likes to write happy, positive songs, I know they can come across too sweet,” he continues. “It’s way easier to write sad songs—you play minor chords and it’s instantly cooler. It takes a lot of effort to make something happy not sound cheesy, but I feel like that’s my life’s work. And right now, in the world, we need love in all forms.”

That spirit certainly informs Grammer’s "Give Love," featuring LunchMoney Lewis, from his third album, The Good Parts, which was released on December 1, 2017. "Give Love" follows the success of his platinum hit “Fresh Eyes,” which has racked up over 350 million total streams and became his sixth single certified gold or better. Andy’s new hit single, “Smoke Clears” is out now.

“There’s a balance between organic and pop sounds,” he says, “I’ve created my own lane where I don't feel constrained to just serve up shiny, super-produced pop tracks." Even without the aid of a specific genre to categorize himself, Grammer’s music was an immediate sensation, as he became the first male pop star in a decade to reach the Top 10 at Adult Pop Radio with "Keep Your Head Up" and "Fine By Me," from his 2011 self-titled debut. His second album, Magazines or Novels, featured the triple-platinum smash "Honey, I'm Good," which was one of the best-selling songs of 2015, and the certified gold anthem "Good to be Alive (Hallelujah)."

Grammer claims, though, that he’s not stressed by any big expectations following these supersize hits. “There was way more pressure on the second album—that one almost killed me,” he says. "That felt like, if I didn't get it right on the second album, there might not be a third. But it went well, so there was more freedom this time, which really let me go to different places with the music.”

He points to a song called “Good Parts,” which he’s been performing onstage, as an example of the ways in which he is pushing his writing for the new project. “The idea is that when we share our flaws with each other, that’s what intimacy is—being genuinely vulnerable is how we get closer. So, I’m working on getting my own good parts out, being brave and sharing everything.”

This sense is especially acute for Grammer, who has now welcomed newborn daughter, Louisiana, into his life. “A couple of the tracks definitely speak to how incredible this experience is,” he says. “Everything feels new, you’re re-looking at all the things you’ve seen before. It’s an exciting way of writing a love song—words I thought were becoming boring became interesting again—and it obviously breeds good songs to prioritize things beyond your career.”

Grammer wrote over 100 songs for the new record, and says he was writing and “still trying to beat the best” up until the last minute. (He points out that "Honey, I'm Good" was the last song he wrote for Magazines or Novels.) He has learned that the struggle and the joy come from digging for those lyrics that express an emotion that is both real and resonant.

“Newton had an "aha moment" when an apple fell on his head which prompted him to suddenly understand exactly what gravity is. He took this thing that we were all dealing with everyday, that hadn't been fully understood or explained yet, and he proved it in writing. Everyone who heard about it must have been like "oh my god totally, I'm dealing with gravity aaall the time too! Literally everyday! I think that every great song has an element of this in it. An "aha moment" that allows us to suddenly understand something more clearly or in a different way. A feeling of uncovering some universal truth that we all deal with. It can be sad, happy, trivial, or profound but if a song has this element in it, then I start getting really excited.”

“The hardest part for me to get are words that I think are really worth saying," Grammer continues. "I spend 80 percent of my time on that. I know that I'm going to be singing these words on stage over and over again, so that motivates me to make sure that I'm saying things that I really believe in. But once the lyrics are in line, the rest is usually more fun, more loose- then I can focus on the songs production elements and figure out how I can take a song to the next level and follow where the words are telling me to go with it.”

As he continues stacking up hits in a young career, Andy Grammer has learned some things—but not everything—about what it takes to connect with an audience. “I can’t tell you why a song goes huge, but I do know when you’ve uncovered something that’s true,” he says. “We all have emotions and experiences that are true to us, but in the process of getting that into a song it usually crumbles and falls apart. It's kind of like an emotional game of telephone. Once in a while though, an emotion or feeling makes it all the way through the gauntlet and is still totally intact in the form of a song. When that happens, you know it has a chance to go big."

“And when you do create something great,” he adds, “you get to keep playing it, the song continues to give you what you need, it stands up to the test of time and still reaches people. And that’s the goal.”