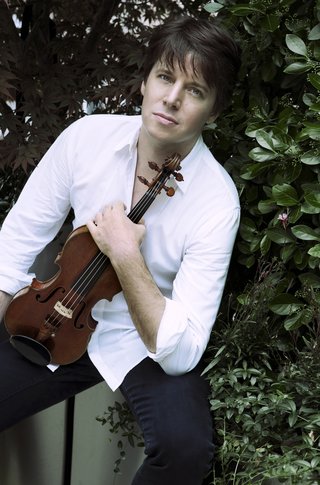 With a career spanning more than 30 years as a soloist, chamber musician, recording artist and conductor, Joshua Bell is one of the most celebrated violinists of his era. An exclusive Sony Classical artist, Bell has recorded more than 40 CDs garnering Grammy, Mercury, Gramophone and Echo Klassik awards. Named the Music Director of the Academy of St Martin in the Fields in 2011, he is the only person to hold this post since Sir Neville Marriner formed the orchestra in 1958. Slated for release June 22, is Bell’s recording with the Academy of Bruch’s Scottish Fantasy and g minor Concerto. Bell recently engaged in two tech projects: with Embertone, the leading virtual instrument sampling company, the Joshua Bell Virtual Violin was created for producers, artists, engineers and composers. Bell also teamed up with Sony for the Joshua Bell VR Experience featuring Bell performing Brahms’ Hungarian Dance No. 1 in full 360-degree VR. This experience is available for free download for SONY PlayStation 4 VR.

Perhaps the event that helped most to transform Bell’s reputation from “musician’s musician’ to household name was his incognito performance in a Washington, D.C. subway station in 2007. Ever adventurous, he had agreed to participate in a Washington Post story by Gene Weingarten which thoughtfully examined art and context. The story earned Weingarten a Pulitzer Prize and sparked an international firestorm of discussion. The conversation continues to this day, and inspired the 2013

children’s book The Man with the Violin by Kathy Stinson, illustrated by Dušan Petričić from Annick Press. Recently published by the same team is The Dance of the Violin which recalls the 12-year-old Bell making a mistake at the Stulberg International String competition and the unexpected outcome which transpired when he was given a second chance. Bell has reached new audiences from collaborations with artists outside the classical arena and performances on television shows including his 2017 seventh Live from Lincoln Center special: Joshua Bell: Seasons of Cuba. Appearances on The Tonight Show, CNN, and CBS Sunday Morning, Sesame Street and all three seasons of Amazon’s Mozart in the Jungle have earned new fans. Joshua Bell with Friends @ The Penthouse, Great Performances – Joshua Bell: West Side Story Suite from Central Park, Memorial Day Concert performed on the lawn of the U.S. Capitol, and A&E’s Biography also comprise his CV. He has twice performed on the Grammy Awards telecast, playing music from Short Trip Home and West Side Story Suite, and has been a presenter and a Grammy Award recipient. Growing up with his two sisters in Bloomington, Indiana, at age four, he received his first violin after his parents noticed him plucking tunes with rubber bands he had stretched around his dresser drawer handles. By 12, he was serious about the instrument, thanks in part to Josef Gingold, his beloved teacher and mentor. Two years later, Bell came to national attention in his debut with Riccardo Muti and the Philadelphia Orchestra. His Carnegie Hall debut, an Avery Fisher Career Grant and a notable recording contract followed. Convinced of the value of music as a diplomatic and educational tool, Bell participated in President

Obama’s Committee on the Arts and Humanities’ first cultural mission to Cuba. He is also involved in Turnaround Arts, another project implemented by the Committee and the John F. Kennedy Center for the Performing Arts which provides arts education to low-performing elementary and middle schools. Bell has performed for three U.S. Presidents as well as the President of China and devoted himself to several charitable causes, most notably Education Through Music. Bell performs on the 1713 Huberman Stradivarius violin.