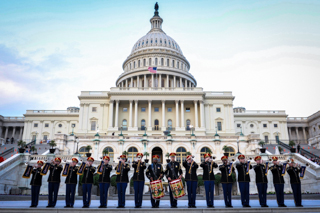 The U.S. Army Herald Trumpets are the official fanfare ensemble for the President of the United States. Founded in 1959 and patterned after traditional British fanfare trumpet ensembles, the U.S. Army Herald Trumpets were formed to add splendor to official military ceremonies. A performing element of The United States Army Band “Pershing’s Own” in Washington, D.C., the ensemble has performed for countless events of national and international significance. Their first official performance welcomed Her Royal Highness Queen Elizabeth II to Chicago for the opening of the St. Lawrence Seaway, and in the ensuing years they performed for an illustrious array of presidents, prime ministers and royalty at the White House and abroad. Notable events include 14 presidential inaugurals, the G-8 Economic Summits in 1984, 1990, 2004 and 2012, the 50th Anniversary of the United Nations, and the arrival of Pope Benedict XVI at the White House in April 2008. In addition to official military duties, the Herald Trumpets performed in the opening ceremonies for the 1980 and 2002 Winter Olympic Games, the 1984 Summer Olympic Games and the 1996 Centennial Olympic Games. Also, the ensemble performed at nationally and internationally televised events such as Super Bowl XXXIX, The Kennedy Center Honors, the relighting of the Statue of Liberty and annual holiday celebrations, A Capitol Fourth, Christmas in Washington and the National Memorial Day Concert. The U.S. Army Herald Trumpets have been featured with orchestras from around the world, including the National Symphony Orchestra, the New York Philharmonic, the Hollywood Bowl Orchestra, the Istanbul State Symphony Orchestra, the Boston Pops, the Cincinnati Pops, the Saint Louis Symphony and the Baltimore Symphony Orchestra. The Herald Trumpets have performed with the Mormon Tabernacle Choir and the Orchestra at Temple Square in Salt Lake City. For more information, visit http://www.usarmyband.com/herald-trumpets/the-us-army-herald-trumpets.html.