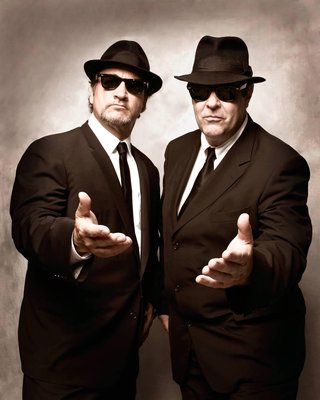 The Blues Brothers The Blue Brothers

November, 1978. Jake and Elwood Blues make their national television debut (and first paying gig) on Saturday Night Live with their breakthrough, high-energy rendition of Sam and Dave’s classic “Soul Man.” It was an overnight sensation that catapulted these two brothers from Calumet City, IL to the heights of stardom. “Soul Man” sparked a national summer tour, two platinum albums and the landmark feature film, The Blues Brothers.

Fifteen years later, after the passing of Jake, the long-lost Brother Zee finally peeled his face from the gutter to carry on the family tradition: a high-energy, authentic, rhythm- and-blues show band- with a South Memphis accent and an East Texas kick. Elwood Blues returns as “the legacy” and joins Brother Zee as “the blood,” singing and dancing their way through all the greatest Blues Brothers hits: “Sweet Home Chicago,” “Messin’ with the Kid,” and, of course, “Soul Man,” all backed by the internationally renowned Sacred Hearts:

Johnny Lee "Shotgun" Schell (guitar) – He has worked at a guitarist and singer in the recording studio for the last thirty years with such greats such as Bonnie Raitt, Joe Cocker, Etta James, Melissa Etheridge, Taj Mahal, Lyle Lovett and Buddy Guy. In 2002, he played on Grammy-winning albums by Jimmie Vaughan and Delbert McClinton and has since been working as a film composer.

Joe "Lester" Sublett (saxophone/composer) – Joe is an accomplished musician, who, along with Darrell Leonard as the "Texicali Horns," has worked on film soundtracks such as "Indecent Proposal," "Tommy Boy" and "That Thing You Do." He has performed with such legendary performers as Stevie Ray Vaughn, Little Feat, B.B. King, Wynonna Judd, Travis Tritt, Elton John, Bruce Springsteen, and he won a Grammy for his work with Taj Mahal and the Phantom Blues Band. Joe has performed on television, on Grammy award-winning records such as "In Step" with Stevie Ray Vaughn and "Feels Like Rain" with Buddy Guy, as well as composed film scores.

Johnny "The Beast" Rubano (vocalist/trumpet)- John will tell you he’s actually an actor who can sing. John is a former member of Chicago’s famed Second City. His credits include numerous television and film roles, including regular appearances on "According to Jim." His voice can be heard on animated projects including “Pinky and the Brain,” “Superman” and the lead voice in “The Greedy Show” on Shockwave.com. His previous music experience includes trumpet and vocals with the Kurt Goletz Big Band.

J.J. "Taboo" Holiday (guitar) – From Seattle to Chicago, J.J. has made the scene with Sunnyland Slim and legendary guitarist Hubert Smith. Then he went on to Cleveland to work with Robert J. Lockwood and to Memphis to work with Gus Cannon and Furry Lewis. Working with Bob Dylan’s band, Carole King and The Blues Brothers, he continues to play on scores of movies for composer David Newman.

Melodye Perry (vocals) – Melodye is the female vocalist for LA station 92.3; she is also a singer/songwriter, having worked with producers David Banner and Warryn Campbell (Mary Mary). Most recently, she is the single vocalist on Tyler Perry’s trailer for his new movie, “For Colored Girls.” Her next venture is working on her solo project. She is excited about it and her future is bright.

Jimmie "The Dynamic" Wood (harmonica/vocals) – Jimmie is known by those who have heard him play as "The Cadillac of Harmonica Players." Ask Bruce Springsteen, Etta James, Bruce Hornsby, Gladys Knight, Cheap Trick and Megadeath. He’s worked with just about everyone to show them how blue the blues can be.

Darrell "The Good Shepherd" Leonard (trumpet) – Darrell is a multi-faceted arranger and composer who has worked on the Rhythm and Blues Foundation Pioneer Awards, the Directors Guild Awards and has performed with Wilson Pickett, Stevie Ray Vaughn, Henry Mancini, Joe Walsh, Glenn Fry and scores of others. He even won a Grammy for his work with Taj Mahal and the Phantom Blues Band. Along with Joe Sublett as "The Texicali Horns," he has recorded with such greats as Smokey Robinson, Otis Rush, Linda Ronstadt, Little Feat, Lou Rawls and much, much more. He has done musical arrangements for such films as “Home Alone,” “Swing Shift,” “Indecent Proposal,” “Tommy Boy,” and, most recently, music for the soundtrack to “The Divine Secrets of the Ya Ya Sisterhood.”

Tony "Diamond Ring" Braunagel (drums) – Born in Houston, Texas, Tony grew up listening to the rock, country, blues and gospel music that provided the soundtrack to his life. He has played with Eric Burdon, with Rickie Lee Jones of her "Girl at her Volcano" LP and toured with Bette Midler. He eventually joined Bonnie Raitt’s band and worked on the Grammy award-winning "Nick of Time" and "Luck of the Draw.” He has worked with hundreds of performers, even the cast of "According to Jim,” where his regular appearances prove that John Rubano and Jim aren't the only actors in the bunch. And if he's never recognized with an Emmy for his acting chops, he'll have to console himself with the Grammy he received for his work with Taj Mahal and the Phantom Blues Band.

Les Lovitt (trumpet) – Les is a classically trained trumpet player from the San Francisco Bay Area who studied with Brass Masters Edward Haug and Claude Gordon. After moving to Los Angeles in the early 1980s, he began touring with Woody Herman and the Thundering Herd, Mel Torme, Debbie Reynolds, Peter Nero, The Mcguire Sisters, The Monkees, Jack Mack, Glen Campbell and most recently with The Eagles. Les can be heard on more than two hundred recordings that include diverse artists such as Herbie Hancock, Bobby Womack, No Doubt, Neil Diamond, Bob Belden, Buddy Greco, Gregg Allman, Brian Setzer, Hoobastank, Mark Masters Jazz Composers Orchestra, Dwight Yoakam and Sheryl Crow (to name a few). He can also be heard on many Motion Picture Soundtracks, including "Always,” "Mask," "Starsky & Hutch,” "Someone to Watch Over Me," "McHale's Navy," "On Sunset," "Thelma & Louise," and "Big Mama.” He currently resides with his family in Thousand Oaks, California.