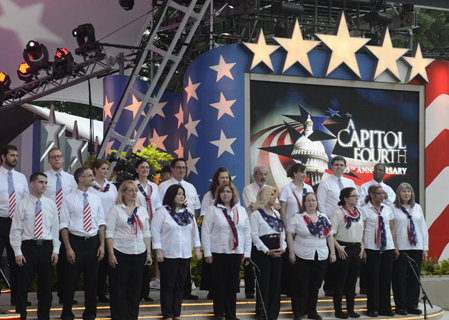 Choral Arts Society of WashingtonThe Choral Arts Society of Washington (Choral Arts) is a prestigious organization with a rich history of performing locally, nationally and internationally, and over its 51-year history it has become an integral part of the Washington, D.C., community. Today, Choral Arts is comprised of two performing groups: the Choral Arts Chorus, a symphonic chorus featuring over 190 singers, and the roughly 30-member Choral Arts Chamber Singers, now in their second season. Under the leadership of Artistic Director Scott Tucker, Choral Arts produces an annual concert season primarily at the John F. Kennedy Center for the Performing Arts including, fall and spring concerts, a Christmas series, a choral tribute to Martin Luther King, Jr., concerts for students and a chamber series in intimate venues, in addition to frequent artistic collaborations. Recent invitations include Choral Arts’ debut with both The Philadelphia Orchestra and the Pennsylvania Ballet, and performances with Wolf Trap Opera and the Baltimore Symphony Orchestra. Last summer, Choral Arts embarked on a five-city tour of China with the Qingdao Symphony Orchestra at the invitation of the Chinese Ministry of Culture. The organization has earned awards not only for its artistic excellence, but its administrative leadership and educational portfolio. Choral Arts has an impressive history of commissioning and performing new works, as well as presenting area and world premieres of outstanding contemporary music. Founded in 1965 by Norman Scribner (1936-2015), Choral Arts has long been respected for its excellence in performing a wide-range of music, and the organization is dedicated to connecting with D.C.’s growing diversity inclusive of race, ethnicity, age and abilities. For more information or to contact Choral Arts, please visit www.choralarts.org.