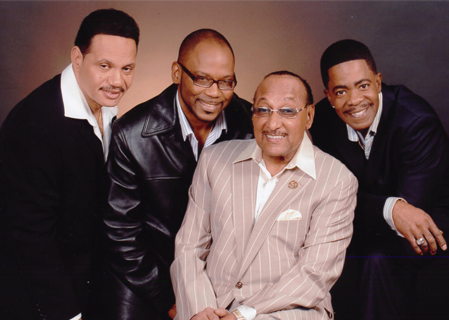 The Four Tops are an American vocal quartet, whose repertoire has included doo-wop, jazz, soul music, R&B, disco, adult contemporary, hard rock, and showtunes. Founded in Detroit, Michigan as The Four Aims, lead singer Levi Stubbs (born Levi Stubbles, a cousin of Jackie Wilson and brother of The Falcons' Joe Stubbs), and groupmates Abdul "Duke" Fakir, Renaldo "Obie" Benson and Lawrence Payton remained together for over four decades, having gone from 1953 until 1997 without a single change in personnel.

Among a number of groups who helped define the Motown Sound of the 1960s, including The Miracles, The Marvelettes, Martha and the Vandellas, The Temptations, and The Supremes, the Four Tops were notable for having Stubbs, a baritone, as their lead singer; most groups of the time were fronted by a tenor. The group was the main male vocal group for the songwriting and production team of Holland-Dozier-Holland, who crafted a stream of hit singles, including two Billboard Hot 100 number-one hits: "I Can't Help Myself (Sugar Pie Honey Bunch)" and "Reach Out I'll Be There." After Holland-Dozier-Holland left Motown in 1967, the Four Tops were assigned to a number of producers, primarily Frank Wilson. When Motown left Detroit in 1972 to move to Los Angeles, California, the Tops stayed in Detroit and moved over to ABC Records, where they continued to have charting singles into the late-1970s. Since the 1980s, the Four Tops have recorded for, at various times, Motown, Casablanca Records and Arista Records. Today, save for Indestructible (owned by Sony Music Entertainment), Universal Music Group controls the rights to their entire post-1963 catalog (through various mergers and acquisitions), as well as their 1956 single, "Could It Be You."

A change of line-up was finally forced upon the group when Lawrence Payton died on June 20, 1997. The band initially continued as a three-piece under the name The Tops, before Theo Peoples (formerly of The Temptations) was recruited as the new fourth member. Peoples eventually took over the role of lead singer when Stubbs suffered a stroke in 2000 with his position assumed by Ronnie McNeir. On July 1, 2005, Benson died of lung cancer with Payton's son Roquel Payton replacing him. Levi Stubbs died on October 17, 2008. Fakir, McNeir, Payton, and Harold "Spike" Bonhart, who replaced Peoples in 2011, are still performing together as the Four Tops. Fakir is now the only surviving founding member of the original group.