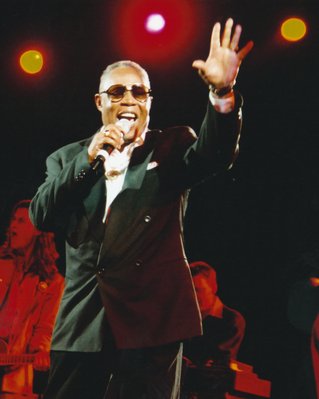 For years Sam Moore, who grew up “Overtown” was best known for lending his unmistakable stand out lead vocals to the Grammy winning, Memphis based Stax Records, soul duo “Sam & Dave”. Songs like "Hold On I'm Coming," "I Thank You," "When Something Is Wrong With My Baby," "Soul Sister," and the duo's monster hit "Soul Man" catapulted them up both the Pop and R&B Charts selling more than 10 million records worldwide. They were so successful that the duo was inducted into the Rock & Roll Hall of Fame in 1992.

Though Sam has tremendous love and respect for the music he created as a duo, that was born in Miami’s Liberty City’s King of Hearts Nightclub in 1961, Sam has also scored critical acclaim as a solo artist for more than 30 years.

Sam as a soloist has received the coveted NARAS Florida’s Grammy Chapter Heroes Award, an AFTRA AMEE Lifetime Achievement Award, earned the ETAM Living Legend Award, the Pioneer Award from the Rhythm & Blues Foundation and inducted into the GRAMMY Hall of Fame for "Soul Man."

Rolling Stone Magazine named Sam Moore one of the “Top 100 Greatest Singers of All Time.”

A lifelong fan of Country Music, Sam has had success in the format over the years – thanks to his 1994 collaboration with Conway Twitty on “Rainy Night In Georgia,” which was the last recording of Twitty’s career. He also shared the stage with artists ranging from Zac Brown, Vince Gill, Trace Adkins to Brenda Lee and George Jones.

Always an artist to roll the dice and take musical chances, Sam recently successfully entered into the world of Bluegrass in 2014, while collaborating with Nu-Blu on “Jesus and Jones,” which garnered national attention and became a critically acclaimed single for both Moore and Nu-Blu.

Sam continues to work tirelessly, testifying before Congress and speaking any time he has an audience, to secure a broadcast performance right for himself and his fellow recording artists who do not receive any payment when their songs are broadcast on AM and FM radio in the United States which also means American artists cannot collect the nearly $200 Million Dollars a year they’ve “earned” from all around the world.

Sam participated in the launch of the Bill currently before Congress to embrace and include all of the Pre-1972 Masters, of all genres of music and all recording talent from Elvis to Otis, Ella and Frank to The Beatles, Hank Williams and comedians too like Flip Wilson under the Federal Copyright Act to give them their deserved status under the DRM and etc.

Sam, who is often seen on various television shows, has been the more or less “mystery” voice singing the soulful Bang Bang Bangity Bang renditions on “How I Met Your Mother.  Sam’s performance of “Soul Man” at the 1989 George H.W. Bush Inaugural Concert, that was produced and directed by his wife Joyce for Lee Atwater, is presently airing for the first time ever on numerous PBS stations some 25 years after it occurred.  Also on that show were Bo Diddley, Dr. John, Willie Dixon with Cash McCall, Albert Collins, Stevie Ray Vaughn, Carla Thomas and Billy Preston among others.

On April 4, 2014, the unfortunate anniversary of the loss by assassination of Dr. Martin Luther King, a song Sam recorded recently in Memphis, “They Killed A King” is being released to honor Dr. King’s memory and remind us all of his message. During the time of Dr. King, Sam and duo mate Dave often traveled the south as the opening act for Martin at rallies and speeches so participating in this project, besides the obvious link to his fame sprouting in Memphis where Dr. King was lost to us all, has an extra note of importance to Sam.

Sam celebrated the 50th anniversary of signing his recording contract with Atlantic Records in February.  2015 also marks Sam’s 60th year as a recording artist and performer with his start in Miami’s famed “Overtown.” Then there’s a big birthday - though he neither looks, sounds, nor acts like it - Sam actually hits his 80th milestone on October 12th!

Sam’s was indicted into The Georgia Music Hall of Fame with Greg Allman, John Huie and others on September 26th, The Memphis Music Hall of Fame along with Justin Timberlake, Scotty Moore and Al Jackson Jr. on October 17th , participating at Kennedy Center’s Mark Twain Award Honoring Eddie Murphy has just flown to Nashville from participating in a salute to his dear friend Ray Charles at the White House.