The U.S. Army Band "Pershing's Own" 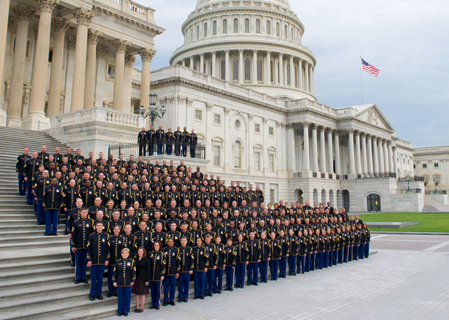 The U.S. Army Ceremonial Band The United States Army Band “Pershing’s Own” has been the premier musical organization of the U.S. Army since 1922 when Army Chief of Staff General John J. “Black Jack” Pershing directed that it be formed to emulate the premier European military bands he had heard during the First World War. “Pershing’s Own” provides musical support for the leadership of the United States, including all branches of government and a wide spectrum of national and international events in support of soldiers and their families, public diplomacy, community and international relations, recruiting initiatives and music education programs. Since its original organization in 1943, The U.S. Army Ceremonial Band has grown to meet a wide range of commitments. While the Ceremonial Band’s primary mission is to support the more than 2,000 military funerals each year in Arlington National Cemetery, the band performs other missions of national and international importance. These missions include wreath laying ceremonies by heads of state and other foreign dignitaries at the Tomb of the Unknown Soldier, monthly retirement parades, special reviews, and arrival and departure honors for foreign dignitaries at the White House and Pentagon. Recent major events include 2009 Presidential Inaugural festivities, the State Funerals of Presidents Ronald Reagan and Gerald R. Ford, ceremonies honoring Her Majesty the Queen of England Elizabeth II during her visit to the United States in May 2007, and nationally televised PBS broadcasts of the National Memorial Day Concert and A Capitol Fourth with the National Symphony Orchestra. The 70 musicians of the U.S. Army Ceremonial Band come from some of the most prestigious music conservatories and universities in the country. Beyond their ceremonial roles, members of the U.S. Army Ceremonial Band routinely display their versatility and superb musicianship while performing with other elements of the U.S. Army Band, in chamber group performances, on recital programs and as soloists for summer concerts. Commitments performed by the U.S. Army Ceremonial Band are some of the most visible missions performed by The United States Army Band “Pershing’s Own.” Visit us at: http://www.usarmyband.com/ceremonial-band/the-us-army-ceremonial-band.html.