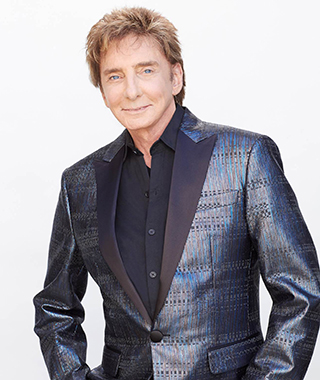 “Among the few things one can count on in life: the taste of McDonald’s cheeseburgers, I Love Lucy reruns are still funny — and Barry Manilow never wearing out his welcome at the top of the charts.” — Billboard Magazine

Music is Manilow’s passion — both in the studio and in the classroom. While he has released over 40 albums, Manilow has also raised millions of dollars through his Manilow Music Project.

Manilow’s roots are in his native Brooklyn, where music was an integral part of his life. By the age of seven, he was taking accordion lessons and playing on a neighbor’s piano.

In 1974, Clive Davis founded a new label, Arista, in collaboration with Columbia Pictures and signed Barry Manilow. Manilow, using his arranging and producing abilities, changed the British rock song “Brandy” into the sweeping ballad that the world knows as “Mandy,” which reached No. 1 in early 1975 and ignited one of the most incandescent careers in pop music.

Manilow is ranked as the top Adult Contemporary chart artist of all time, according to R&R (Radio & Records), with over 50 Top 40 hits. The list includes all-time favorites that Manilow still sings today: “Mandy,” “It’s a Miracle,” “Could It Be Magic,” “I Write the Songs,” “Tryin’ to Get the Feeling Again,” “This One’s for You,” “Weekend in New England,” “Looks Like We Made It,” “Can’t Smile Without You,” “Even Now,” and the Grammy® Award-winning “Copacabana (At the Copa).”

But Manilow would describe himself as a musician before he would call himself a singer. From the beginning, his love of music was, and it still is, in arranging, composing and songwriting.

Manilow is a winner of Grammy®, Emmy®, and Tony® awards and has been nominated for an Oscar. To date, 29 of his albums have been certified platinum. He has been inducted into both the National Academy of Popular Music’s Songwriters Hall of Fame and the Great American Songbook Hall of Fame.

In addition to his own foundation, the Manilow Fund for Health and Hope, other involvements include The Prince’s Trust, United Way, the Starlight Foundation, The Dream Foundation and several leading organizations for AIDS prevention and research.

To date, the Manilow Music Project has raised millions of dollars and has placed brand-new instruments into the hands of students across the country. As Manilow says, “Anyone can make a difference. Just call your local schools and ask them what they need. Get ‘em a new set of drums! Music changes a young person’s life.”

After spending an unprecedented 10 years at the top of the pop music charts, this multitalented producer, arranger, musician, composer, singer and performer has succeeded with albums focused on ’50s jazz, techno-jazz, big band swing, show tunes, Sinatra swing, songs from the Great American Songbook, Christmas music and rock ‘n’ roll. No wonder Rolling Stone dubbed him “The Showman of Our Generation.”