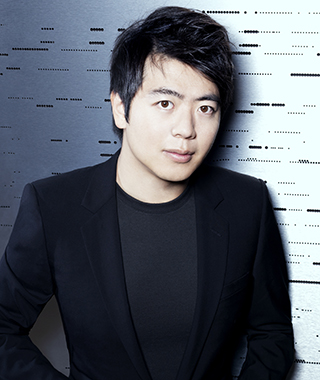 If one word applies to Lang Lang, to the musician, to the man, to his worldview, for those who come into contact with him, it is “inspiration.” It resounds like a musical motif through his life and career. He inspires millions with his open-hearted, emotive playing, whether in intimate recitals or on the grandest of stages — such as the 2014 World Cup concert in Rio, with Placido Domingo, to celebrate the final game; the 56th and 57th Grammy Awards, where he performed with Metallica and Pharrell Williams; the Opening Ceremony of the 2008 Beijing Olympics, where more than four billion people around the world viewed his performance; the Last Night of the Proms at London’s Royal Albert Hall; and the Liszt 200th birthday concert with the Philadelphia Orchestra and Charles Dutoit, which was broadcast live in more than 300 movie theaters around the United States and 200 cinemas across Europe (the first classical music cinemacast to be headlined by a solo artist). He forms enduring musical partnerships with the world’s greatest artists, from conductors such as Daniel Barenboim, Gustavo Dudamel and Sir Simon Rattle to artists from outside of classical music — among them dubstep dancer Marquese “Nonstop” Scott, king of the crooners Julio Inglesias and jazz titan Herbie Hancock. He even builds relationships with corporations that help him get classical music to ever more people. And he builds cultural bridges between East and West, frequently introducing Chinese music to Western audiences and vice versa.

Yet he never forgets what first inspired and continues to inspire him: great artists, above all the great composers — Liszt, Chopin and others — whose music he now delights in bringing to others. Even that famous old Tom and Jerry cartoon “The Cat Concerto,” which introduced him, as a child, to the music of Liszt — and that childlike excitement at the discovery of music now surely stays with him in what he calls “his second career,” bringing music into the lives of children around the world, both through his work for the United Nations as a Messenger of Peace focusing on global education and through his own Lang Lang International Music Foundation. As he inspires, he is inspired.

Time Magazine named Lang Lang in the “Time 100” list of the most influential people in the world, citing him as a symbol of the youth of China, and of its future. Lang Lang is cultural ambassador for Shenzhen and Shenyang. And if the Chinese passion for piano isn’t solely due to him, he has played a large part as a role model — a phenomenon dubbed by The Today Show "the Lang Lang effect." Steinway Pianos for the first time named a model after a single artist when they introduced “The Lang Lang Piano” to China, specially designed for education.

And the child Lang Lang was and who, perhaps, is always within him would surely have approved of the way he gives back to youth. He mentors prodigies, convenes 100 piano students at a time in concert, and has dedicated his Lang Lang International Music Foundation to cultivating tomorrow’s top pianists, providing music education at the forefront of technology, and building a young audience.

Lang Lang has been featured on every major TV network and in magazines worldwide. He has performed for international dignitaries including the Secretary-General of the UN, Ban Ki-moon; four U.S. presidents; President Koehler of Germany; former French President Sarkozy and President François Hollande. Among many landmark events, he was honored to perform recently for President Obama and former President Hu Jintao of China at a White House State Dinner, as well as at the Diamond Jubilee celebratory concert for Queen Elizabeth II at Buckingham Palace.

Honors include being named one of the World Economic Forum’s 250 Young Global Leaders; honorary doctorates from the Royal College of Music, Manhattan School of Music and New York University; the highest prize awarded by China’s Ministry of Culture; Germany’s Order of Merit and France’s Medal of the Order of Arts and Letters.