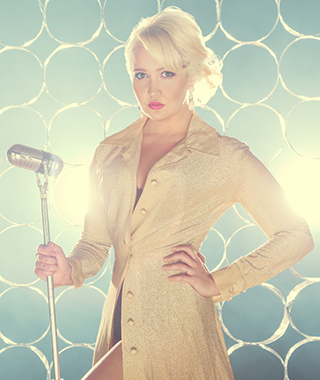 Powerful. Soulful. Distinctive. These are just a few of the adjectives used to describe the incredible voice and natural allure of Meghan Linsey. She uses her voice, her presence and the songs she so carefully crafts to tell the stories she wants, or more accurately, “needs” to tell.

Her years growing up in the musical melting pot in and around New Orleans are what she credits as influences of her unique sound. “I grew up listening to Etta James, Aretha Franklin, and my favorite ... Whitney Houston,” Meghan says. “I loved the soulfulness of their voices. But I also fell in love with the storytelling of country music and the songs of artists like Dolly Parton, Tanya Tucker and Patty Griffin. Anything with grit and soul really resonates with me."

Meghan showcased her soulful, signature sound, and captured America’s heart, on NBC’s The Voice, as viewers voted her runner-up on Season 8. More about that later.

At age 14, Meghan started playing shows with her own band. A year later she was opening for acts such as Brad Paisley and Blake Shelton at events around Louisiana and Texas. She also began to make regular trips to Nashville to play at the legendary Bluebird Cafe. “I played the early slot, but I would always stay for the late show because that’s when so many of the great songwriters I loved would play,” she says. It wasn’t long before she began writing with many of those same songwriters.

After graduation, Meghan went to Nashville to chase her dream.

She enrolled at Belmont University to study music and continued to write songs and play shows. To make ends meet, Meghan began hosting karaoke at a bar in Printer's Alley in downtown Nashville. It was there she met Joshua Scott Jones. The two began writing and performing together as Steel Magnolia.

The duo’s unique sound and style caught the attention of the producers of CMT’s music competition show Can You Duet, and their powerful stage performances propelled them to win the competition, which resulted in a record contract with Big Machine Records. Their first single, "Keep on Loving You," shot to No. 4 and was the highest charting debut single from a male/female duo in country music history. Meghan and Josh sold nearly one million downloads and albums, appeared on national television shows and toured with superstar acts Brad Paisley, Blake Shelton, Reba and Bob Seger.

In 2013, Meghan and Josh parted ways. Meghan has since worked on new music and a new sound.

On the season finale of The Voice, Meghan was the first contestant ever to be able to sing and release an original song on the show. Her song “Change My Mind” immediately shot to the top five on iTunes’ all-genre chart and sold more than 50,000 downloads in less than a week.

Other chart highlights from Meghan's performances on The Voice include:

In addition, her performance videos have been viewed more than 5 million times.