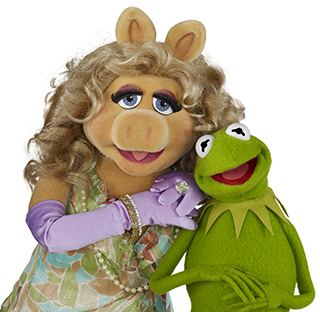 The Muppets For almost 60 years, the Muppets have entertained film and television audiences with their unique blend of heart and humor. The creation of the late visionary Jim Henson, the Muppets are among the world’s most recognized and beloved characters, led by the world’s most famous amphibian, Kermit the Frog. Born one of several thousand tadpoles in a southern swamp, Kermit's life began swimmingly. With only his talent, his banjo and a song in his heart, a young, green Kermit headed out to make his way in the big world of show business.

Miss Piggy’s luck prospered when she got frequent work as a hand model, a gig which, oddly enough, led to her entering the Miss Bogen Country beauty contest that was to change her life forever. There she met her adored frog, Kermit.  And the rest, as they say, is history.

Since The Muppets Studio joined The Walt Disney Company in 2004, the Muppets have starred in a series of award-winning viral music videos, multiple television specials, press appearances, attractions at Disney Parks and are featured in a wide array of Muppets merchandise. In 2011, they reunited in the feature film The Muppets, one of the year’s best reviewed films, and returned in Muppets Most Wanted, which released March 2014. Visit www.muppets.com for more news and information.