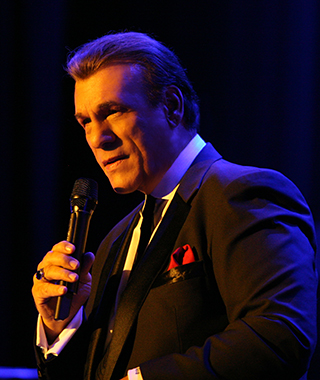 Robert Davi is an award-winning actor, screenwriter, director, producer and jazz vocalist. An entertainer few can rival, he is also hailed by many as one of today's great interpreters of the “Great American Songbook.” His most notable film roles include his portrayal of the opera-singing baddie in Goonies; one of the most popular James Bond villains, Franz Sanchez, in License to Kill; FBI Special Agent Big Johnson in Die Hard; Al Torres in Showgirls; Max Keller in Raw Deal; and Leo Marks in The Iceman. He made his motion picture debut in Contract on Cherry Street, in which he shared the screen with the Chairman of the Board himself, Frank Sinatra. Today, Robert Davi is one of the film industry's most recognized tough guys. He has also starred on the small screen in hit shows like Profiler, Stargate Atlantis, Criminal Minds and CSI. With over 140 film and TV credits, he has frightened us, romanced us, and made us cry or split our seams laughing. Few in Hollywood have made the transition from actor to singer so naturally, eloquently and passionately as Robert Davi. In 2011, he released his debut album, Davi Sings Sinatra: On the Road to Romance (produced by Grammy award-winning producer Phil Ramone) to rave reviews. “Sinatra’s collection of unforgettable masterpieces helped the world fall in love with our country,” says Davi. “During my parents’ time, while our country faced many difficulties, this music helped it glow with promise and optimism. Frank Sinatra's voice was the soundtrack for their lives, and no one sang it better.” Within weeks of its highly anticipated release, the album soared onto Billboard Magazine's Top 10 Jazz Chart, taking the number 6 spot for several weeks. Music icon Quincy Jones also shared his praises: “I have never heard anyone come this close to Sinatra’s sound and still be himself. Many try, but Robert Davi has the voice, the tone, the flavor and the swagger. He absolutely touched me down to my soul and brought back the essence and soul of Ol’ Blue Eyes himself.” In addition to thrilling audiences and critics alike on his June 2014 Australian tour, Davi has recently been the guest artist on Italy's version of The Voice. He also completed a sellout tour of Latvia, Riga, Sweden and Budapest in April 2015. He has played top venues like the Venetian and Orleans hotels in Las Vegas, Foxwoods in Connecticut (where he will perform September 5 and December 12) and last summer for over 12,000 people at the Harry Chapin Theater in East Meadow, Long Island, where he will perform again on August 8, 2015. He has also been chosen to sing at the United Nations’ Presidential Gala on June 30. Besides working in film, television, and music and raising his five children, four dogs and two cats, Davi keeps busy volunteering with such charities as The Dream Foundation, Exceptional Children's Foundation, Heart of a Child Foundation, the Los Angeles County Sheriff's Youth Foundation, The Humane Society of the United States, Heart of a Horse, NIAF, The Order “Sons of Italy” in America (OSIA), and UNICO.