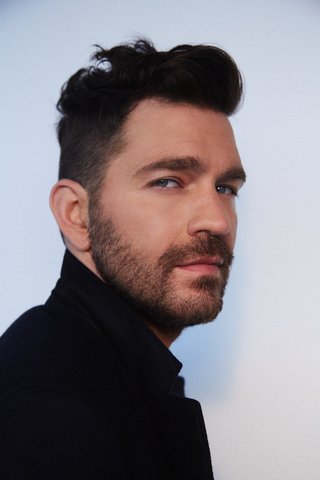 Nothing makes a statement quite like a smile does. Regardless of the country or the language, it universally signifies happiness. At the same time, it might also be the most rebellious gesture possible in the modern age. While culture conflates outrage, gloom, and anger with “cool,” flashing a smile doubles as insurgence. When on stage, multiplatinum singer and songwriter Andy Grammer not only grins, but he also often takes the opportunity to remind audiences to shine as well.

These relatively quiet moments ring out just as loudly as his vocals, guitar, and piano do.

“I say, ‘Keep your shine all the way up, because we need it. Don’t ever the let the world dim you,’” he exclaims. “It’s the most important thing I can give the crowd on any given night. If you carry the optimistic flag, people might think you’re confused or question whether or not you know how bad the world is. I want to send out good vibes and love for any situation, though.”

Fans actively share in the love, transferring it right back to him…

Since his 2011 self-titled debut, Grammer has consistently delivered stratosphere-size smashes, buoyed by impressive range, deft musicality and endless charisma. By 2019, he scored six chart-topping hits—each certified gold or better by the RIAA. The artist’s breakout “Fine By Me” and its follow-up “Keep Your Head Up” are both certified platinum. His 2014 sophomore offering, Magazines or Novels, went gold and yielded the gold “Good To Be Alive (Hallelujah).” During this chapter, the single “Honey, I’m Good” reached quadruple-platinum status globally, emerging as “one of the best-selling songs of 2015.” He maintained this streak on 2017’s The Good Parts. The standout “Fresh Eyes” tallied over 350 million streams, achieving a platinum plaque. Not to mention, he consistently sold out headline gigs everywhere.

As he retreated into writing mode in 2018, sharp self-awareness and a healthy sense of pressure pushed him to deliver at the highest level possible.

Rather than look outward, he turned inward.

“When you’re unknown, hitting it the first time is an incredibly difficult thing to do,” he explains. “However, repeating it is even harder when you’re known. It’s a rollercoaster. As I was thinking about this, I realized it’s cool there’s always another mountain to climb. I figured out the only way to stay relevant was to find a way back to myself. I began pulling layers back to get closer to who I really am. It’s invigorating as an artist. My journey is less about trying crazy things and experimenting; it’s more about becoming comfortable with my core, who I am, and why I’m here.”

That brings us to Grammer’s fourth full-length, Naïve (S-Curve Records/BMG). This time around, he changed up the process, incorporating robust instrumentation from the jump. He recalls, “In the past, we would add live instruments after writing. For these songs, we jumped into the studio and played them at the beginning.” Lyrically, the record sees him directly confront an ongoing struggle by getting personal. In fact, the title might as well be a coat of armor for him.

“There’s a serious struggle to be happy these days,” he admits. “I’ve been referred to as ‘the positive guy’ whose only shade is ‘yellow.’ So, I flipped the idea on its head. This album is the underbelly of how you get to ‘yellow’—or a place of happiness and positivity. I’ve always worn rose-colored glasses about humanity and life in general. Of course, I recognize it’s tough out there, but I’m not just going to be cynical about things. It’s a rebellious resistance to embrace being Naïve. I don’t see the bad in looking for the good.”

This energy coursed through the first single “Don’t Give Up On Me.” Featured in the big screen drama Five Feet Apart, the song clocked 18 million Spotify streams in three weeks between the original and R3HAB remix. With its lithely picked acoustic guitar and handclaps, it immediately empowered on the chant, “Even when nobody else believes, I’m not going down that easily, so don’t give up on me.”

“It’s about not giving up,” he says. “It’s really special to me, because there’s a reckless abandon to keep going. This spirit runs through the whole album.”

Backed by a marching stomp, airy production and bright riffs, “Wish You Pain” transmits an unexpected, yet poignant message to any and all aspiring artists.

“A young girl asked me for advice,” he recalls. “I sincerely said, ‘You need to go and get your ass handed to you. You need to start putting your heart out on the line every chance you get—and you need to get it completely destroyed.’ Number one, you will grow a lot. Number two, you will have things to sing about. You just need to get in the game and start getting your ass kicked. It’s true,” he smiles.

At points, the record highlights his knack for stark simplicity with nothing more than piano, vocals, and a guitar solo on “I Am Yours” or the acoustic declaration of the title track. On the other end of the spectrum, an intimate choir adds heavenly thunder to “My Own Hero.”

Meanwhile, “She’d Say” represents the biggest departure. Towing the line between world music and pop, he welcomed Ladysmith Black Mambazo on the emotionally charged anthem. It ponders what Andy’s late mother might say to his young daughter, inspired by shamanic advice, courtesy of Dannion Brinkley.

Fittingly, it ends with words from his daughter.

“It’s just so wonderfully weird,” he laughs. “My wife got me a phone call with Dannion. He’s an author who was struck by lightning twice. As soon as we got on the phone, he asked, ‘Who is Kathy?’ I said, ‘That’s my mom’. So, he tells me, ‘Kathy wants you to write a song to your daughter about what she’d say to her, because she can’t say it.’ After I wrote it, I tracked down Ladysmith Black Mambazo when they were in town, because my mom was a huge Paul Simon fan. I blew up a picture of her in the studio. They wrote the words in Zulu and sang. It sounds insane, but it’s really special.”

Like everything Grammer does, these moments commute and inspire happiness in its purest form.

“I want to empower people,” he leaves off. “When life can be dark, it feels revolutionary to be happy. The real goal is to allow listeners to be themselves and feel more comfortable.”