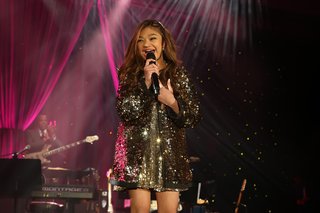 Angelica Hale is an inspiring 11-year old singer-songwriter and actress from Atlanta, Georgia who sang her way into the hearts of America on Season 12 of America's Got Talent in 2017 and America’s Got Talent: The Champions in 2019. She is currently the youngest runner-up in the show’s history and the only contestant ever to have received two Golden Buzzers. She was a featured performer in the 91st Macy's Thanksgiving Day parade in 2017 and has also appeared on Little Big Shots (twice), the Today Show, Access Hollywood, Harry, Pickler & Ben, and many others. She just released her debut single, “Feel The Magic”, and her debut album of the same name will be arriving soon.

She has performed at high-profile events all over the world, performing for Michelle Obama, George W. Bush, David Foster, Quincy Jones, and John Legend. Most recently, Angelica performed for all the NFL team owners at Super Bowl LIII, and she frequently performs anthems and halftime-shows at events for MLB, NFL, NHL, and NBA. Angelica is also an actress, voice-over artist, and member of the SAG-AFTRA guild. In 2018, Angelica made her feature film debut in “American Reject” alongside Billy Ray Cyrus, Keala Settle and Rebecca Black. Angelica was honored to voice a guest starring role in the upcoming Disney series “T.O.T.S.” about the hilarious adventures of best friends Pip and Freddy, a tenacious penguin and a kind-hearted flamingo, who are the only non-stork delivery birds in-training at Tiny Ones Transfer Service (T.O.T.S.).

Angelica is currently serving as the first kid ambassador of the National Kidney Foundation, ambassador of the Sepsis Alliance, and celebrity advocate for Children’s Miracle Network Hospitals. Angelica overcame life-threatening double pneumonia when she was only four years old that resulted in sepsis and multiple organ failure, of which her kidneys would never recover. Angelica’s mother, Eva, donated one of her kidneys to save Angelica’s life. Ever since Angelica received a clean bill of health, she has been paying forward her miracle story by donating her time and talent to raise funds and awareness for deserving non-profits that help children in need. Angelica is humbled to use her gift of music to entertain and spread love and hope to people all over the world.