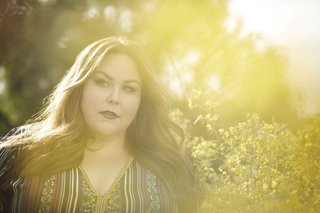 When Chrissy Metz, who plays Kate Pearson on the award- winning NBC series This Is Us, read the script for an episode in the show’s first season where Kate sings Cyndi Lauper’s “Time After Time” at a retirement community, she thought the show’s creator, Dan Fogelman, had made a mistake. “I didn’t audition as a singer, so I was like, ‘Wait, what?’” she recalls with a laugh. “I called Dan and said, ‘You want me to sing?’ And he said, ‘If you don’t feel comfortable, we can dub it,’ and I said, ‘No, no, I would love to try and for the character to have that piece of her story.’”

What Fogelman didn’t know when he wrote the episode was that Kate’s story mirrored Metz’s own. Growing up in Japan, where her father was stationed, and Gainesville, Florida, Metz harbored dreams of being a singer after growing up with the sounds of Motown and later influenced by Mariah, Whitney, Steve Perry, Ann and Nancy Wilson of Heart, as well as country singers Faith Hill, Alison Krauss, and Bonnie Raitt. She also found peace singing hymns in church. “Music was such a touchstone in my life,” Metz says. “It was the way I could release my emotions, but also understand what other people were going through.”

It didn’t occur to Metz that singing was something she could do professionally. “A couple of my friends were aspiring singers,” she says. “They were talented, beautiful and all the things I thought you needed to be in order to actually become a popular singer. And I was like, ‘Yeah, that's not going to happen.’ And it wasn’t as if my family had money for any extracurricular activities like voice lessons to cultivate the craft. Being cast on This Is Us has been such a gift in my life for so many reasons, one being that it provided a space to discover why I was afraid to create my own music or pursue something that was this important to me in the first place.”

The show’s viewers may have known Metz had a phenomenal voice, but the rest of the world found out when Metz performed “I’m Standing With You” — from the soundtrack to the 2019 film Breakthrough (which Metz also starred in) — at the Oscars in February. (Written by Diane Warren, it was nominated for “Best Original Song.”) But country music fans already knew Metz could sing thanks to her performance of “I’m Standing With You” alongside Carrie Underwood, Lauren Alaina, Mickey Guyton, and Maddie & Tae at the ACM Awards in April 2019. Impressed by her composure at the ACM’s and discovering Metz was writing and traveling to Nashville on her own dime for almost two years prior to the performance, Universal Music Group Nashville president Cindy Mabe (who suggested the women perform together) offered Metz a deal with EMI Records Nashville.

This April, the label released Metz’s debut single, “Talking To God,” which Metz loved on first listen because it was up-tempo but had a contemplative message. “When I wake up or go to bed, I pray and think about the people who aren't in my life anymore,” she says. “I always send them love and wish them well even if they've hurt me. I just think that in the time of desperation and need, whether you’re religious or not, people talk to God because you're on your knees at that point, it’s the moment of surrender. I think people can really relate to that. I certainly do.”

“Talking to God” is the first single from Metz’s upcoming debut album, which she describes as having a “soul-country” feel. “Organ and pedal steel guitar are two of my favorite instruments,” she says. “The album is country with those rhythm and blues undertones. You’ll hear the values of country music with some bounce and incredible musicianship thanks to the producers Jimmy Robbins (Kelsea Ballerini, RaeLynn) and Derek Wells (Maddie & Tae, Scotty McCreery), as well as a host of Nashville songwriters, including Nicolette Hayford (Ashley McBryde) with whom Metz cowrote several songs.

“I knew I wanted to tell stories through the songs and share my personal experiences,” Metz says. “I thought, ‘If I'm going to make music, I want it to be as personal as possible.’ That's why I wanted to be a part of the process. The writer’s room is one of the most magical places on earth. That several strangers can go into a room and in four hours have a song that could change people's lives? It is a moment in time to be revered. Coming from the TV and film world, there are many drafts of a script and it can take years to get anything off the ground. But with music, you can come out of an afternoon with a piece of art that simply didn’t exist just hours before,” Metz shares.

While writing the album in both Los Angeles and Nashville, Metz has mined her life for subject matter, emerging with songs that are vulnerable, intimate, and deeply relatable. Metz’s pain is palpable on the break-up song “Actress,” where she encounters an ex with his new girlfriend, who asks how they know each other. “He said I was just a friend,” she sings. “Thank God I’m an actress, he don’t know what’s on my mind. And even though I’m laughing, I ain’t having a good time.” “I do love writing sad songs,” Metz says with a chuckle. “The whole point of sharing our stories is to grieve what’s lost, move through the pain and come out on the other side better for it. That’s what I gravitate toward in the artists I love.”

But Metz’s songs are hardly gloomy, they bend more toward inspirational uplift, even when touching on hard emotions. “Pretty Girl” was inspired by the narrative that our intrinsic value comes from what we look like or present as. “It can be daunting,” she admits. “I do the comparing and despairing thing myself. It’s about knowing on a soul level the hardships we go through and the way we move through our lives is what makes you beautiful, that is what holds true value. It’s not about the external vehicles we're in, but who we are and how we treat each other.”

“Feel Good” finds Metz in the moment where she realized she was done living her life for other people and that it was time to put the focus on herself. “I started to feel good when I allowed myself to do the things that I wanted to do like pursuing music. I can't worry about what people are going to say, think, or do. I've got to do what feels good to me.”

Through her honest songwriting, Metz not only gives herself permission to do what makes her happy, she invites her listeners to follow their hearts as well. She wrote about her journey toward self-love and acceptance in her best-selling 2018 memoir This Is Me, sharing honestly about a childhood marked by poverty, as well as her father abandoning the family and her new stepfather subjecting her to repeated humiliations over her weight. Metz found solace in music. “I would sing and make tapes on my little boombox,” she says. “Then when I was in middle school, I wanted to learn an instrument, but my mom couldn’t afford the monthly fee to rent one. The only instrument left was a baritone, which is like if a tuba and a trumpet had a baby, I joined the choir.”

Though she dreamed of making music, she thought she might have more success as a comedic actor. “I was class clown my senior year of high school,” she says. “I was always cracking jokes. That's the way I dealt with the sadness and longing in my life. You laugh instead of cry. So, I wanted to cheer people up because I wanted to be cheered up. I wanted to be the female Jim Carrey.” She was still obsessed with music, but it took a backseat as she focused on assisting her then manager during “pilot season” in Los Angeles. Metz had an agent but no auditions. Per her manager’s suggestion she came to assist her agent, then became an agent herself. “So even acting was put on hold for nine years,” she says. “Music wasn't really supported or encouraged by the people in my life the way that I hoped in my heart it would.”

Then one year, Metz’s husband at the time gave her sessions with a vocal coach as a birthday gift. “Her name was Dot,” Metz says. “She was different. She talked about how we sing from the inside out and that it's really about how we feel — that how we see the world is the way that we sing. It was really beautiful. I began to look at music as a way to express what I was feeling, because I had truly suppressed it all.” Metz and her husband eventually divorced, and she began focusing on herself and what would make her happy. That journey of self-discovery led her back into the arms of acting. Music was a long shot she was still too afraid to take. It would be years after when This Is Us and Kate Pearson came along. “It’s funny how our stories are parallel,” Metz says of her character. “As Kate is exploring music, I, as Chrissy, am like, ’Oh my gosh, I'm just as scared as Kate is, but I really want to do this.’ And much like her, she never felt encouraged or supported, I always felt like I was never good enough, just as Kate feels she will never measure up.”

Metz hopes that anyone who listens to her music will be inspired and feel less alone. “I hope people feel that we are more alike than we are different and that we all have individual journeys that we are invited to learn and grow from. For me, the more vulnerable I get, the more vulnerable people get with me. So hopefully, it'll crack something open in anyone who is listening.”