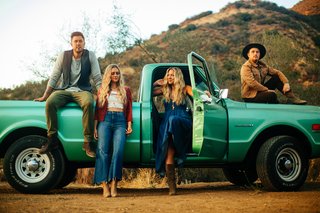 Some things are inevitable. More than Grammy Awards or platinum albums, sometimes friendship is greater to motivate creativity, serving as its own momentum. Such is the case for how the harmonically buoyant, impossibly lush acoustic rock-country of Gone West came to be.

On a personal break from one of the most musical pop breakthroughs of the last several years, multiple Grammy-winner Colbie Caillat and her fiancée Justin Kawika Young (11 #1 Hawaiian songs) decided to head to Nashville where Caillat’s co-writer, recording artist and friend Jason Reeves was living with his wife songwriter/Academy of Country Music Award nominee Nelly Joy. For Caillat, who’d already collaborated with Taylor Swift and Brad Paisley, as well as CMA Song of the Year winner Liz Rose, it felt almost like a homecoming.

“They introduced us to all of their friends, and everyone was so welcoming,” Caillat recalls of the 2017 move. “I didn’t have any set plans, but I’d always thought it would be fun to be in a band.”

The warm familiarity extended to the creative groove the four friends enjoyed from their 14-year history of making music together. While Reeves, who’s also written for Lanco, Kenny Rogers, the Jane Dear Girls and Rachel Wammack, has been working with Caillat since “Bubbly,” there was a chemistry between the four that was undeniable. When the opportunity for an acoustic tour came up based on her The Malibu Sessions, which featured the foursome, they took their friendship on the road.

“We realized how much fun touring could be when you have your best friends, and significant other – and dogs on the road and onstage with you,” Caillat remembers.

Suddenly a creative incubator for four friends was turning into Gone West, a fresh harmony, breezy melody group whose myriad influences landed somewhere between Laurel Canyon, Texas roadhouses, Appalachia’s harmony and the plains of the Midwest.

As Joy explains, “We all come from different places in life, so we all relate to country differently,” and Reeves continues, “What we’ve always loved about country music is its history of storytelling, rich harmonies and organic instruments, and we wanted to continue in that tradition.”

Indeed, a live acoustic version of “This Time” barely uploaded to YouTube when an invitation to play the Grand Ole Opry arrived.

“I remember thinking, ‘Don’t mess this up!’ because I know it’s a live radio show,” Caillat recalls. “Liz Rose, who we wrote with, was there, and Rita Wilson, too. It was so emotional, and we felt so supported. You could hear a pin drop when we walked out. The foursome took it as a blessing and sign, realizing this was something more than just the joy of true collaboration.

Indeed. They were inspired, and the recording process quickened.

Produced and co-produced by the band, Gone West’s music brings a new freshness to modern country, straddling singer/songwriter vulnerability, Iowan humility, Lone Star tenacity and Hawaiian steel guitar. The playing is spare enough the instruments and voices shine, while the lyrics, which offer a heart-positive embrace of life, stand-out in the mix.

Whether the self-declaratory “Gone West,” where the foursome draw on their lives and the lives of the people they love for inspiration, or the sweeping love that’s not over, but has been squandered in “What Could’ve Been” with its back-and-forth lead vocals, Gone West is mapping a more evolved take on how people really inhabit their lives. Nuance rises, and truth is explored.

Not that everything is so impossibly heavy. Yes, the aching “Home Is Where the Heartbreak Is,” co-written with CMA Song of the Year winner Liz Rose, is a rhythmic take on the loneliness of being in an empty relationship. But there’s also the effervescently celebratory break-up song “Confetti,” the philosophically perky letting go of “Knew You,” that sees past the pain to a self-embracing reality, and the jaunty escape of “R&R,” where the foursome finding joy in merely getting lost doing next to nothing.

As Joy explains, “With four or five of us in a room, there are so many viewpoints. We’ve either experienced what we’re writing about or watched friends do the same thing Sooner or later, everyone’s been somewhere along the way, and that’s what we want these songs to be.”

Certainly, the life-grabbing ballad “This Time,” co-written with Nashville Songwriter Hall of Famer Tom Douglas, employs that notion. Invoking things we’re going to get around to – (including the Tom Petty show they figured they’d see next tour) – Gone West’s Mamas & Papas meets the Eagles vocals hit the chorus with extra sweetness, espousing, “Because next time, there may not be a this time…”

Reeves explains, “Tom’s spirit is indescribable, and his brilliance is limitless. That he’d write with us before there was anything going on was amazing.”

“We played him the first song we wrote as a band and he loved it and told us how important our sound was” Caillat continues. “He truly gave us the courage to continue making this record.”

Young agrees. “We’ve all been on tour and written songs together, so starting this band was organic and fun. But hearing Tom’s words made us think we could really do something special.”

“…and we all walked out thinking about this very differently,” Joy picks up. “It was right after the Vegas shootings, Tom Petty had died – and we’d had tickets, but hadn’t gone. It all came together in the song, and I think in our hearts about what we were meant to do.”

And so they did. Writing, exploring, enjoying the unique chemistry their friendship brought to their creativity. On the road, at home, backstage, out in nature, wherever songs might happen. Largely recorded in their own homes with one day with outside players at Nashville’s famed Ocean Way Recording, Tides took shape with love and care. Wrapping up moments of life in melody, harmony and words, they realized, as Reeves explains, “the universe put us together,” Gone West fuses the best parts of being young, engaged and willing to face the heartbreak with a smile to get the good parts.

As Joy explains of the EP’s title, “We’ve all experienced highs and lows in life and love, and the songs we wrote for this album represent those ebbs and flows.”

Those tides that rise can sweep music lovers, especially ones who love breezy life-affirming songs, into a whole new realm of happy. Life isn’t always perfect, but when you’re Gone West, you can find the silver lining, the golden sunset, the lemonade in those moments that often pull us down.