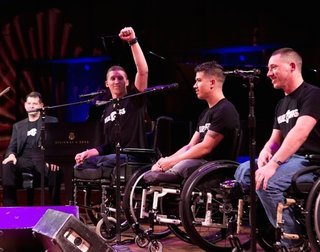 MusiCorps began in 2007 when composer/pianist Arthur Bloom was invited to visit a soldier recovering at Walter Reed Army Medical Center. The soldier, a drummer who had lost his leg to a roadside bomb, was concerned about whether he would ever be able to play the drums again.

Bloom committed to not only helping this soldier, but any injured veteran who wished to learn or relearn an instrument as a core part of their rehabilitation. MusiCorps has since become a pioneer in the field of adaptive music, and helped countless wounded warriors in their recovery.

Formed in response to the crisis of returning service members injured in Iraq and Afghanistan, MusiCorps is a conservatory-level music rehabilitation program that helps wounded warriors play music and recover their lives. It has been praised by the Wall Street Journal as “revolutionary,” is pioneering in the field of adaptive music, and has helped countless wounded warriors learn or relearn how to play an instrument as a core part of their rehabilitation.

The MusiCorps Wounded Warrior Band, the performance component of MusiCorps, is made up of injured veterans who became musicians through MusiCorps. The band has wowed millions of people with powerful performances that speak to the talent and resilience of its members.

The Band has performed with Roger Waters, Yo-Yo Ma, and Sheryl Crow, at the Kennedy Center, Grand Ole Opry, and Madison Square Garden, and on PBS, The Colbert Report, and NCIS.

In recognition of his work with MusiCorps, CNN selected Arthur Bloom as a Top 10 Hero of 2014.